When you’re tasked with creating virtual worlds, being inspired by your real world lifestyle is a major advantage. That’s definitely been the case for Sean Smillie, the creative video game writer and producer who operates Planet Fiction Studios from his hometown of Rossland, B.C. Sean’s fascination with sci-fi and comics started before he could tie his own shoelaces, so his inner five-year-old is psyched his current work has him playing video games and reading comic books for research on the regular. But it hasn’t been all play for Sean; determination and guts pushed him through many major studio doors, including Walt Disney and the sacred Marvel Comics, before a life-altering motorcycle accident and long road to recovery influenced his decision to exit the studio environment and start his own business. Lifestyle has become paramount for Sean, who finds clarity and focus by getting outside with his beloved dogs and enjoying a variety of recreation, including hiking, paddling or skiing. Developing and scrapping ideas from the Red Mountain chairlift makes sense for the former snowboard instructor, who first shifted his career with an entry-level creative role developing a snowboarding game. Now, excited about the growing resources his Metal Tech Alley headquarters has access to, he’s looking forward to expanding his business by attracting other creatives to grow the Kootenays as a hub for the video gaming industry.

Tell us about your work at Planet Fiction Studios.
I’m a work-for-hire creative, so companies approach me to write content and ideas – mainly video game stories and stuff like that. In addition to writing and creating, they also hire me for production and management roles, game design, directing, and audio production.

The second part is my own creative properties; for those I’m not a production house, just an idea house. I just finished a transmedia project: one story told through a comic book, a video game, a movie, and a TV series. I’m also currently writing a book series, inspired by the Barsoom (Mars) books by Edgar Rice Burroughs, which were a huge childhood influence for me, especially in creating fantastical worlds, characters, and stories. You’re also the Executive Producer and Studio Head for RainbowVerse – what have you been working on in that capacity?
We’ve been working on a super high-concept science fiction game with a massive original creative universe; it took 19 months to complete. RainbowVerse is a studio where everyone works remotely, from New Jersey, Florida, Vancouver, the UK, and from here. I oversaw the development of the game, the creative process, and everything else – hiring, day-to-day operations – all of it. The game itself uses cutting-edge technology, and the game engine is like nothing I’ve ever seen. We launched it about two months ago and it’s super awesome. And I did it all from my Rossland office!

Incredible. How did you get started in the industry?
I never went to school; I actually joined the army instead. That was supposed to pay for film school, but when I left my service I didn’t want to sit in the classroom, so I started travelling and became a successful snowboard bum, meaning I had a really good job snowboarding. Funny enough, being a professional ski bum led me to getting into video games and working on a snowboard video game at Electronic Arts. I was a self-taught writer and managed to convince EA that I knew a lot about snowboarding. I lied about my qualifications just to get my foot in the door. I started working at the bottom of the ladder as a part-time writer and worked my way up to being their first-ever staff writer/game designer. Then I became a game designer/producer and went on to work both in-studio and freelance for some of the biggest entertainment companies in the world, like Walt Disney, Ubisoft, and Warner Brothers.

When I felt myself burning out I decided to take a break from the studio system. I wanted to try things I’d had experience in – like management leadership and process budgeting – on my own. I took off on an eight-month road trip, working out of my truck. I’d get up in the morning and mountain bike or surf, find a coffee shop in the afternoon to check my emails and upload my work, and then spend the evening back at the campground writing. I actually wrote a Globe and Mail article about my experience. It also gave me the opportunity to tour all over BC and the U.S. to decide where I was going to live, and it turned out that Rossland made the most sense for me.

Your office is located in the historic Bank of Montreal building in downtown Rossland. What local Metal Tech Alley resources do you use to help you do business here?
I use Juicy Studios for trailers and additional creative. I also use the resources for interacting and networking to meet like-minded individuals. Leveraging the brainpower of people in the community like Jason Taylor, who runs MIDAS (now the Selkirk Technology Access Centre – STAC), is really helpful. There are actually a bunch of people in the area that I consult with or bounce things off of like Jason, Erik Kalacis from Community Futures, Scotty Carlson (Juicy Studios), and Jeremy Kenning (Sherpas Cinema).

My staff and the people I work with are scattered around the world, so it’s nice to have a brain trust here that I can rely on. Going from doing everything over the phone and Skype to sitting and having coffee with people is beneficial. I like the get-togethers put on by the Nelson Tech Club, LCIC, STAC, Community Futures, KAST, and the Rossland Tech Meetup that Darin Recchi started, too.

How did your interest in comics/sci-fi and video games begin?
I started collecting comics when I was five; it was a lot of Marvel: Spider-Man, The Avengers, X-Men. To see the Avengers movies when I’ve been reading about these characters since I was a little kid – like 45 years ago – is amazing. The highlight of my career was working on a Marvel EA game and working at Marvel Comics in New York. The first day I showed up at the Marvel Comics Studio was a moment I will never forget. It was the single greatest moment of my life.

You’ve shared a career highlight; could you also tell us about a pivotal moment?
In 2012 I had a major motorcycle accident. I almost lost my arm, had a massive head injury, a shattered hip, and multiple broken bones. I think it was three or four years of physical rehab; it took me months to re-learn how to walk properly, and my left arm is still a little messed up. It was a big factor in what eventually led me to leave the studio system. I was working too much and it took me years to physically recover. Being in the outdoors was my best rehab. I wanted to be in a better, healthier environment, so re-evaluating living in the city versus the Kootenays was probably my most pivotal career move. My accident introduced me to chronic pain, difficulty sleeping, the whole thing – and city living wasn’t helping. Honestly, now I’m pretty much 99% healed. There are a couple of lingering issues, but I think I’m the only person in the world who suffered a severe back injury and doesn’t have any back problems – it’s unheard of! I’m not saying moving back to the Kootenays a couple of years ago solved everything, but it sure helped; the pace is much better.

Any other reasons you chose to establish yourself in the Lower Columbia’s Metal Tech Alley?
Well, I grew up here and I’ve always appreciated it. Then there’s the work/lifestyle balance; getting to alternate between skiing and snowboarding every day in the winter and paddling and biking in the summer is insane.

This has always been the most creative place for me, and the cost of living is so much lower than Vancouver. I travel a lot for work, and there’s convenient access through the Trail Airport and Spokane. When I previously finished working on a product, I’d always come back to the Kootenays to spend a couple weeks unwinding and refreshing before the launch and going back to work. Now that I run Planet Fiction from Rossland, I can do it all from here. It’s a really creative area.

To expand on what I mean by that, my creative process has three parts: I think things through, then handwrite, then put it all in the computer. So during my initial process I pull a lot of my creativity from my surroundings, like when I go hiking or paddling. Kayaking Kootenay Lake or Christina Lake for a 10-hour day or hiking up Old Glory, Mt. Roberts, or Kokanee is when I formulate my ideas. Even mountain biking, climbing, or skiing in the morning and then heading into the office in the afternoons to write stuff down works. I tried doing it in Vancouver, but it was too distracting, and then I moved to Deep Cove, but it was still too busy. The Kootenays has the perfect balance. My day starts at 5:30 in the morning and nobody’s up, so I walk the dogs around the neighbourhood, filtering ideas and putting them through a sort of stress test. It’s a perfect process for me, and the perfect place for it. 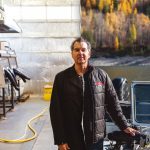